We all remember the aprils fool made by Tarte right? I know I know, it’s just makeup and it’s not that deep and we should not take things to seriously. BUT, this was the time before every other brand released a green, blue or green AND blue palette and I had been waiting for something exactly as the aprils fools joke palette for a long time. So for me it was a dissapointment when the joke was announced. I was not the only one that got annoyed and Tarte got quite a bit of backlash for this. It seemed like I was not the only one that would like this palette and that green and blue eyeshadows are not a joke after all. 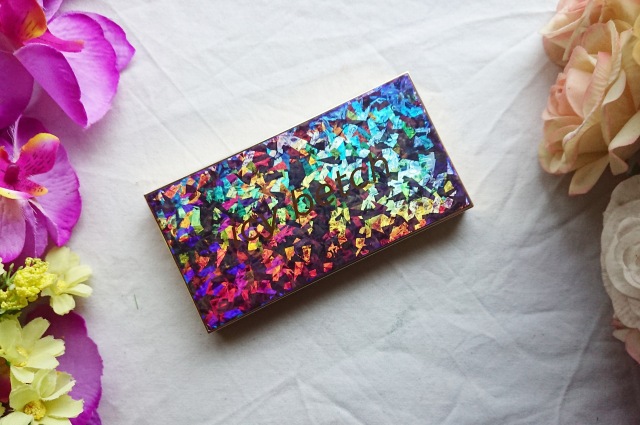 I kind of thought all the bakclash would make them release the palette in the end. But they did not. They released this palette. Sure the name is Icy Betch, but the layout and colors are not the same. Would I prefer the original joke? Absolutely! But you know, Tarte dipping their toes into colors was something I wanted to applaud anyway. And I like the packaging. And it’s chep. And they had free shipping one day. So, here it is!

The packaging is so pretty though. I have to say, considering the price of Tarte palette is quite cheap, I do think you get some very solid and well made packaging. Normally within this price range, producers usually stick to cardboard, but these Tarte packagings are really nice and heavy. This one has a stiker on top of the packaging. It’s loud and sparkly with the palette name on it, but if you peel it off it’s revealed that Tarte reused some old packaging from a discontinued palette. I know a lot of people almost feel “tricked” by this, and that they almost just got something that was not completely new. Me on the other hand think it’s great. Re-use (of any product) is great as long as it’s safe. It’s much better for the environment to reuse old packaging instead of starting up a production line with a whole new palette. It just makes sense to be a bit environmentally causios and use what they already had avaliable. I mean, what  waste it would be throwing out thousands of old packagings and make brand new ones, when they can just add a sticker and reuse. Recycling products are great, and I love that Tarte did that! Go Tarte!

But let’s just talk about the actualy product now! It’s a 10 pan palette with three different pan sizes. 9 of them are proper eyeshadows, but one shade is HUGE and can doubla as both eyeshadow and highlighter. The “highlighter” is a icy white base with a golden peachy sheen in it. It’s very pretty actually both as an eyeshadow and highlighter. One of my favorite things about this palette actually. However it’s strikingly similar to the highlighter in the limited edition “Make Believe in Yourself” palette. The color is spot on, the formula in Icy Betch is just a tiny bit more fine milled.

Besides the highlighter with is obviously a shimmer you get 4 shimmery/metallic shades and 5 mattes. They are all in the blue or green family except the matte that is completely white, but a matte white usually is very nice to blend out matte blue shades with, so I am happy this shade is added to the palette. The white can really save the day if you want a nice transition from your crease to your browbone and the blue is a bit hard to blend.

The pale matte blue shade “Heather” is indeed not an easy shade to work with. It is very dust and applies very patchy.It’s just too easy to blend it away snce it’s so dusty, while it sticks better to some parts of the lid. It does need a very sticky base, and still thenit’s a hard shade to work with. “Vivian” the matte denim blue was also a bit har dto blend in the outer crease, but with a bit of patience it sorted itself out. The bright matte blue “Becky” and matte seagreen “Georgina” worked much better. My favorite way to apply these was with a denser blending brush. So instead of using a fluffy crease brush as I usually do, I applied these two shades with a kabuki-styl blending brush with a much higher density. With that sort of brush these colors layed down very evenly and with a bit of build-up they had good payoff without being patchy. My favorite shade in the palette is “Becky” without doubt.

The shimmers (or metallics, I don’t know they seem somewhere inbetween) are decent. They for sure needs a setting spray to dampen them a bit, but when you do they are very nice and saturated in color. A bit of fallout, and since blue and green fallout is very unconvenioent to get all over your foundation I would for sure recommend doing your base makeup last.

So overall, is it worth it? Well, I like 8 of the shades. The pale matte blue and matte denim blue just require too much work. Sure, you can make them work in the end, but they are so fuzzy that I can’t really brag much about their quality. The rest is decent, and I was happy with how they performed with a little building up and a bit of setting spray. So decent for sure, but these are not the best blue and green palette out there. You do get pretty packaging for a cheap price though, so it that matters to you then it’s a nice piece to add to a collection. But if you are looking for high quality greens and blues this just aint it. They are decent and they work, but they are far from the best thing out there.

With that being said, I really enjoyed the looks I did with it in the end, and I for one appreciate nice packaging, so even though it’s not the best thing out there I don’t have regrets picking it up.

I would say if you really like the packaging then go for it, but if you just want some nice blue eyeshadows go look at Colourpops small 9-pan palettes instead.

Do you have this palette? What are your thoughts?